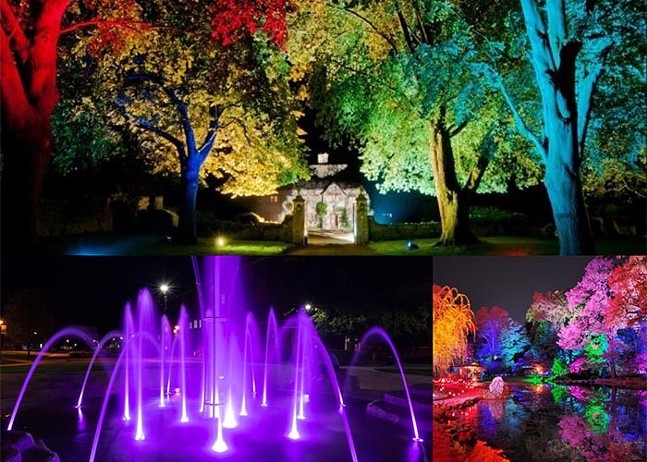 Of all the things to love about Pittsburgh, the parks, some might argue, are the crown jewel of the city. Part of the reason the parks thrive is because of the work done by the Pittsburgh Parks Conservancy, an organization that seeks to maintain and care for the many green spaces in the Pittsburgh region.

Now the Conservancy will celebrate 25 years of service, as well as the many donors, volunteers, and collaborators that have made the organization successful, with Making Your Parks Shine.

In addition to that, there will be a small, private ceremony on Thu., Sept. 30 to congratulate the recipients of the Mary Schenley Medal for Park Stewardship Award, given out every five years to individuals “who have made substantial contributions to the restoration of Pittsburgh’s parks.”

“We’re thrilled to partner on this exciting once-in-a-lifetime creative project to highlight Pittsburgh’s beautiful parks with artistic lighting installations,” says Martin Potoczny, founder and chief executive officer of LUXE Creative, in a press release. “We set out to create a collection of immersive, inclusive, city-wide visual celebration of the impressive work that the Parks Conservancy has accomplished over the 25 years of their service to the Parks of the City of Pittsburgh.”

Conservancy president and chief executive officer, Catherine Qureshi, says that, in previous years, the organization has held gala celebrations to honor Conservancy milestones. This year, however, due to the evolving COVID-19 pandemic, organizers "thought it would be best to create an event that welcomes all Pittsburghers to safely join us in celebrating 25 years of making Pittsburgh’s beloved green spaces shine, by actually lighting them up.”

On Fri., Oct. 1 from 6 - 9 p.m., choose from events at the Walled Garden at Mellon Park, the Patricia Rooney Memorial Foundation at the Allegheny Commons, and Schenley Plaza. The Walled Garden at Mellon Park will have live music provided by Lee Robinson and ISKA, food by Stunt Pig Food Truck, and family-friendly activities. Allegheny Commons Park will have music by Ayesha Scott and food from Tocoyo Food Truck. Finally, Schenley Plaza will host DJ Royal Haunts and food from the Schenley Plaza kiosks.

On Sat., Oct. 2 from 6-9 p.m., August Wilson Park and McKinley Park, as well as the Frick Environmental Center, will all be lit up and bustling with activity. At August Wilson Park, live music will be provided by DJ Blakk Steel. At McKinley Park, there will be music by DJ Rok, food from Steel City Hot Dogs, and activities by Simply Unique Face Painting and Yoga with Apple Tree Studios. The Frick Environmental Center will host LaRue June & the Howling mob, local food vendors, and more.

All six parks will be illuminated both evenings, and, according to a press release, "each space and community party will reflect their respective neighborhoods."