At the Pittsburgh Parks Conservancy, a team works against time to keep a valuable city resource looking healthy and normal. 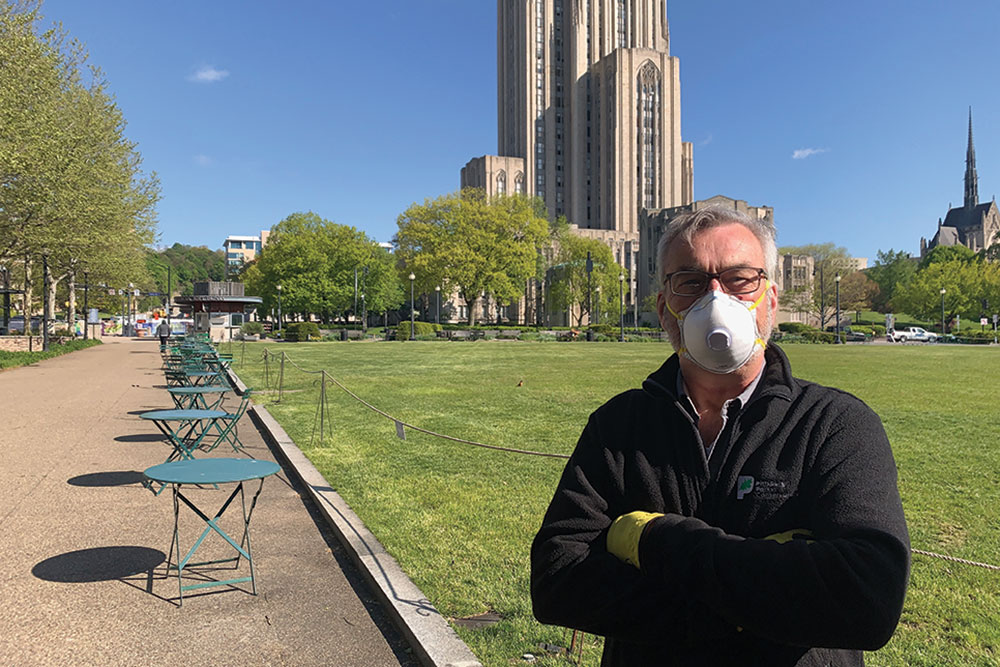 Editor’s Note: At press time, most of southwestern Pennsylvania remained in the “yellow” phase of Gov. Tom Wolf’s reopening plan. While designations and restrictions have likely changed by the time you’re reading this, we have chosen to present these pieces as they were written as a reflection of conditions and mindsets in Pittsburgh during this time.

Things have looked different since COVID-19 closures began. Many storefronts and restaurants are dark. Highways are oddly empty. Institutions that typically operate around the clock — gas stations, airports, casinos — are closed or eerily desolate.

No wonder so many people are going to the parks.
A walk, run or bike through a city or county park has become a necessary reprieve from life at home — and, unlike the visual reminder that comes with looking at a closed business, walking into Frick Park or through Allegheny Commons looks blessedly normal.

For that, you can thank Phil Gruszka and his team.

Gruszka, 68, is the director of horticulture and forestry for the Pittsburgh Parks Conservancy. He and his team typically work on 238 sites spread throughout the 1,700-plus acres of city parkland; due to restrictions related to COVID-19, the number of sites they can fully maintain has dropped to about 60. The focus, he says, is on visible and highly trafficked areas — ensuring that, when you walk into the park, things look much as they would during a normal summer.

“We’re limited because we don’t want to expose the general public and we don’t want the general public to expose any of our staff to the virus,” Gruszka says. “We want to be completely in step with the guidelines for being out and getting done what we can get done.” All the members of his team are working alone, rather than in crews; this allows them to keep working while maintaining social distancing but means that fewer sites can be visited each day.

Additionally, more people — including many newcomers — are using the parks. That’s a good thing, Gruszka says, but it limits the hours he and his crew can safely work. They typically start around 6:30 a.m., but by 10, when more and more walkers and families start entering the parks, “we’re moving to remote locations.”
Most of the work has been in popular areas in Frick and Schenley parks, Allegheny Commons and a few other sites throughout the city. But other sites can’t simply be left alone. “Even though we’re not spending a lot of time there, it still requires us to put eyeballs on it once a month to make sure that some of the invasive plants aren’t becoming established.”

No matter how normal the parks may seem, we’re still in the midst of a pandemic. Guests should not let the comfort of being in the open air preclude COVID-19 safety measures, Gruszka says. “Respect each other’s distance,” leaving at least 6 feet between others on trails, and (as always) properly dispose of any litter brought into the parks. “I show up at the Environmental Center at 6:30 in the morning and find food wrappers and soda bottles thrown on the ground. There’s no reason for that; receptacles are throughout the system.”

The need to comply with regulations is urgent if the parks are going to remain a resource during the pandemic.
“If people aren’t using the parks being respectful of the pandemic — the guidelines that we have in place — the worst thing that can happen is the city could shut them down. And then where would you go for your mental health? The message is really important: Stay compliant with the guidelines for COVID-19.”

Like workers in a variety of fields, Gruszka and his team aren’t able to work in the same ways they have in the past. He says the mission is to do what can be done and press on.

“My staff — who are trained, professional horticulturalists — they see the stuff down to the minutiae. Since this pandemic has set in, it’s like, ‘I know you guys see [more work to be done], but you’ve got three hours there before you have to leave, so you have to get the most egregious stuff first and realize that you’ll come back another day.’”

This article appears in the JUNE 2020 issue of Pittsburgh Magazine.