In the days when women wore hooped petticoats, Allegheny Commons Park was converted from 100 acres of pasture into an 84-acre haven for humans, with a wide promenade.

In 1867, what’s now known as the North Side was Allegheny City, a prosperous little burg that was swept up in the national parks movement of the time. In 1907, it was annexed into the city of Pittsburgh. The original design, and original park, had an allee of trees that lined a grand promenade. Soon it will have one again.

Allegheny Commons, Pittsburgh’s oldest park, will undergo the next steps in a multiphasic historic restoration effort that began with a plan in 2002 between the city and the Allegheny Commons Park Initiative. In recent years, the Pittsburgh Parks Conservancy has picked up where the initiative left off.

The northeast corner of the 60-acre park was completed last year with the return of a large Victorian fountain. Now the restoration heads west along the promenade that parallels North Avenue. The $1.1 million phase covering three short blocks from Sandusky to Federal streets is expected to begin sometime in July and wrap up in November. One of the biggest changes won’t be in the park at all, but to the portion of Federal Street that cuts through it and the double-wide sidewalk along it.

“We want it to feel like a park road,” said Susan Rademacher, the conservancy’s parks curator.

The middle lane will be replaced by a raised garden of pollinator-attracting plants, with a cut for a pedestrian crosswalk. Street parking will be eliminated and half of the double-wide sidewalk will be sacrificed for a grass strip. The Healthy Ride bike station will be moved to a spot beside the bus shelter on North Avenue.

The Hartzell Memorial Fountain, now sitting in a concrete seating area south of the soccer field, will be moved back to Federal Street near the promenade, where it was installed in 1910 with the inscription “For Man, Beast and Bird” —  a birdbath, trough and drinking fountain. 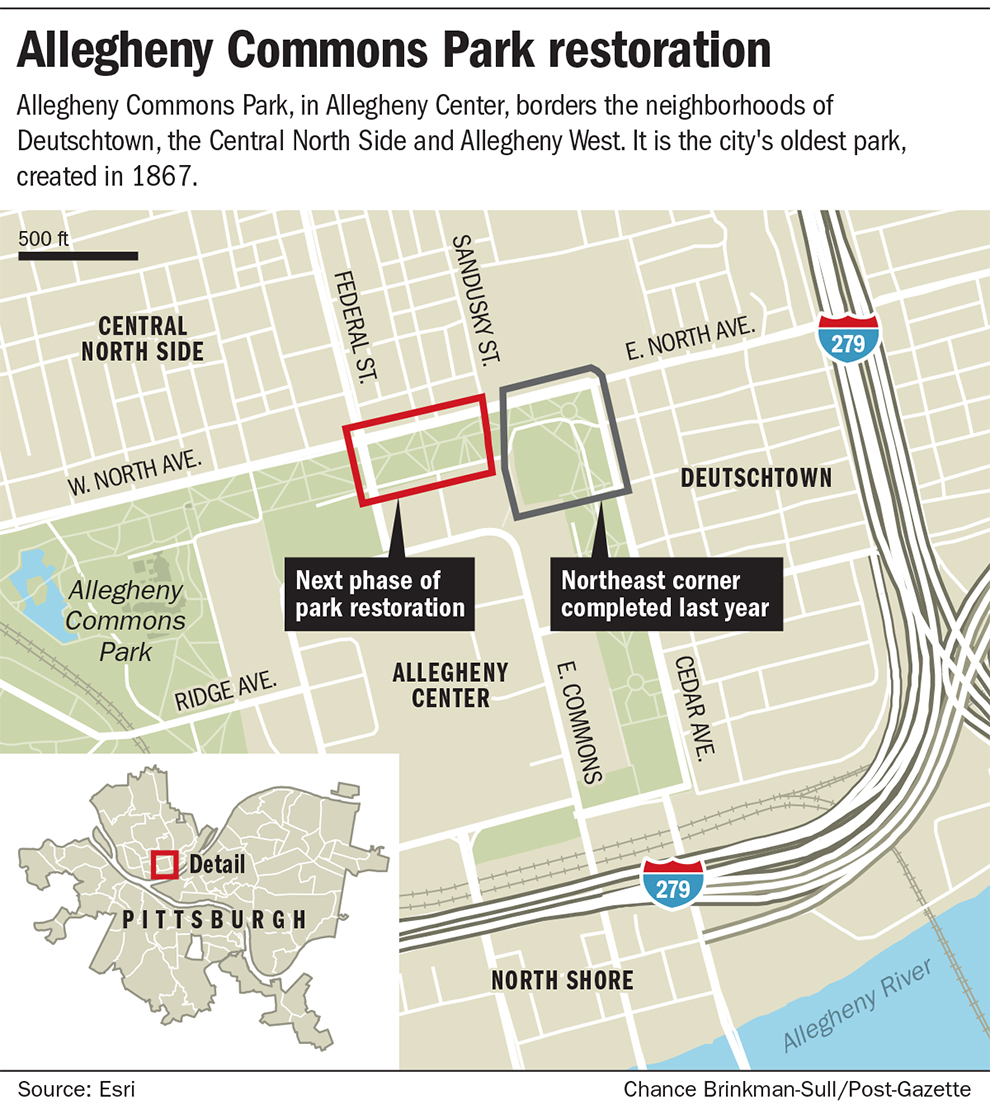 The fountain will not be restored to function, Ms. Rademacher said. The master plan recommended that it not be because it would need lots of repairs that would damage its historic character.

Pipe fencing will be used as an accent at park entrances as it has in other restored areas. The same fencing can be seen in historic photos, including one showing children posing by the Hartzell fountain.

The promenade has become so deteriorated that it’s a deterrent to bicyclists and people in wheelchairs and hard for pedestrians to walk on. Diagonal side paths are either cracked or unevenly blacktopped, and many do not meet up with crosswalks.

“A lot of these pathways dead end at random places,” said Brandon Riley, the conservancy’s capital projects manager, adding that the restoration will reconnect them to crosswalks.

The conservancy is planning the restoration with the city’s Department of Public Works, Department of Mobility and Infrastructure and LaQuatra Bonci Architects.

“Like any heritage park, it had deteriorated,” Ms. Rademacher said. “It is here,” she said, stopping at King PreK-8 school, “where the promenade design begins to fall apart.”

The school and the large sweep of pavement in front of it weren’t there when the park was built. A correction of the landscape will remove extraneous pavement and replace it with grass and trees to improve the entrance to the school, she said.

An assessment of the condition of trees will determine where new plantings will be necessary. The promenade allee will include only towering canopy trees. Ornamentals will make up the understory on secondary walkways, Ms. Rademacher said.

The park is deficient in benches and functioning light poles, too. The light poles in the unrestored part of the park are mid-20th century. Some of their pedestals are cracked and some don’t have lights or globes. The restoration will include 11 new light poles in the historic style, she said.