A week or so after he was hired in 1992 as the new Steelers coach, Bill Cowher was invited to a 40th wedding anniversary party for his new boss, Dan Rooney, and wife, Patricia. That was really the beginning of not just a working relationship that lasted 15 years, but also a parental relationship that existed to this day.

It remained special to Mr. Cowher that Mrs. Rooney always called him “Billy,” much the way a mother would her son.

“She was the most endearing individual,” Mr. Cowher said Sunday. “Pat and Dan were people I worked for, they were my best friends, but they were like my parents. They were all three in one.”

Pat Rooney, wife of the late Steelers chairman, died Saturday at her North Side home, leaving behind a nurturing, compassionate and dignified legacy that stretched from her neighborhood to the far reaches of the National Football League. She was 88. 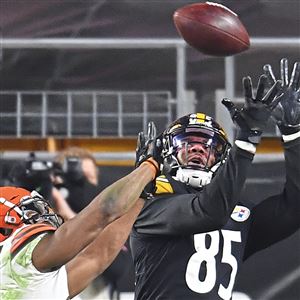 Mrs. Rooney was the mother of nine children, and her maternal manner seemingly touched everyone. That included many of the players who were with the Steelers during the time her husband became team president in 1975 until his death in April 2017.

“Patricia Rooney was a model of quiet strength, grace and faith as she raised her family while aiding community causes and supporting her husband, Dan,” Bishop David Zubik of the Roman Catholic Diocese of Pittsburgh said in a statement Sunday.

“For the 65 years of their marriage, she kept their modest North Side home and made sure the family got to Mass, game or no game,” the bishop said. “She taught humility and kindness by demonstrating it daily. Her commitment to public service was as strong as her husband’s, whether in Pittsburgh or in Ireland during the years of his ambassadorship.

“Mrs. Rooney exemplified quiet leadership here in Steelers country and beyond. My prayers are with the Rooney family, as is my confidence that she has raised the younger generations to carry on her spirit of charity and concern for all.”

Mrs. Rooney traveled the country and the world with her husband, but always embraced the North Side neighborhood where she grew up and lived.

She was actively involved with charity work for the Salvation Army and other North Side projects. As a board member of the Pittsburgh Parks Conservancy, she was an advocate for Allegheny Commons and led fundraising for restoration of a grand fountain in the park’s northeast corner.

Patricia Rooney grew up not far from the house she would later share with her husband since 1993. They attended the same grade school — St. Peter’s on the North Side — and started dating when they were attending high school. They were 19 when they got married in 1952. 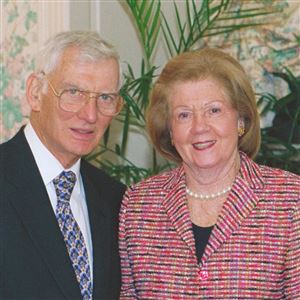 In his book, “A Different Way to Win, Dan Rooney’s Story,” Jim Rooney, one of their nine children, said his mother grew up in a family that struggled to make ends meet. But Patricia’s mother “always figured out how to get her family fed, but often it was just soup. Sometimes they went to the convent where they were given bread and other necessities.”

Once she was old enough, Patricia held several jobs, first at a local drugstore, then at Woolworth’s, to help support her family. She worked at the Steelers offices later on in her marriage to Dan and supported him through his many endeavors — not just with the Steelers, but in his role as a peacemaker and voice of reason in the NFL.

But life wasn’t always easy for her. Patricia and Dan had to deal with the death of three daughters — Kathleen, Rita and Joan. And yet they always comported themselves in the same positive, upbeat and dignified manner, fueled by faith that saw them attend Mass every Sunday, no matter which part of the country or world they were visiting.

“She was the most loving individual and down to earth,” Mr. Cowher said. “She never wanted to talk about herself. She was the most selfless person. In the complex world we live in, she embodied the simplicity of life.”

Mrs. Rooney carried that same charm and manner with her to Ireland when her husband served three years (2009-12) as ambassador to Ireland, appointed by President Barack Obama on St Patrick’s Day, 2009. The Rooneys lived in the Phoenix Park area of Dublin in a home called Deerfield Residence that once housed the chief secretary of Ireland. Mrs. Rooney often traveled with her husband when he visited every corner of the island.

“We join friends across America & Ireland in mourning the passing of Patricia (Regan) Rooney,” the Embassy of Ireland USA said on Twitter. “Daughter of [County] Mayo immigrants, wife of Ambassador Dan Rooney, mother to nine beloved children, she made a great impact in Ireland, as in her beloved Pittsburgh.”

Prior to that, Mrs. Rooney, a graduate of the University of Pittsburgh, taught English at Robert Morris University and remained an emeritus member of RMU’s board of trustees.

The Rooneys founded the Rooney International Visiting Scholars Program at RMU, which each semester brings accomplished scholars from around the globe to the Moon campus. They also supported construction of the Rooney House, where the visiting scholars stay on campus.

“Patricia Rooney was beloved at Robert Morris, just as she was everywhere she went,” Robert Morris president Chris Howard said in a statement. “Her generosity and tireless commitment to the Pittsburgh community will be sorely missed.”

Former safety Ryan Clark, an ESPN analyst, said on Twitter: “Mrs. Rooney was a beautiful woman! She was so kind, caring & loving. She will be missed, & I am forever grateful to her, Mr. Rooney and their family. Tell the old man we miss him. Rest in Paradise.”

“Steeler Nation lost a wonderful woman tonight,” former linebacker Chad Brown said. “A few months after my daughter was born, Mrs. Rooney picked out a game day outfit for her first game. She picked it out personally. Delivered it personally. It’s the football business but it’s the Steeler family.”

Tributes came in from around the NFL, as well.

Arizona Cardinals owner Michael Bidwill issued a statement saying Mrs. Rooney’s “love for Pittsburgh and passion for the Steelers was extraordinary. It was reflected in her generous and tireless commitment to that community throughout her life.” Mr. Bidwill’s grandfather, Charles, the team’s original owner when the franchise was located in Chicago, was best friends with Steelers founder Art Rooney Sr.