Nearly 60 newly planted trees are taking root in Allegheny Commons, a North Side park that was designed in 1867, making it Pittsburgh’s oldest green space.

Eleven black street lamps line the 15-foot-wide, newly paved promenade that stretches from Cedar Avenue to Federal Street. At that intersection, there’s a new bike lane and a yellow pedestrian crossing that makes it easier for people to get through the park. Two raised medians force motorists to slow down.

By the end of April, the large rebuilt Northeast Fountain that opened in 2019 will be turned on, and city water will once again flow into Lake Elizabeth, where blooming cherry blossoms frame a spectacular view of Downtown.

The 82-acre park’s improvement has come after years of public meetings, the creation of a 2002 master plan by landscape architects Pressley Associates, its listing on the National Register of Historic Places in 2013, a 2018 action plan by local landscape architects LaQuatra Bonci, a 2019 strategic plan by the Pittsburgh Parks Conservancy and a whole lot of fundraising.

This year, city residents received a bill for their share: a new parks tax that will generate $10 million annually. Voters, who narrowly approved the tax in 2019, will find their individual share will vary because $50 is assessed on every $100,000 of assessed real estate value.

It comes just in time for Allegheny Commons, whose total cost will be between $50 million and $60 million, according to James Snow, senior director of development for the Pittsburgh Parks Conservancy. “We have a $400 million capital backlog in the system.” 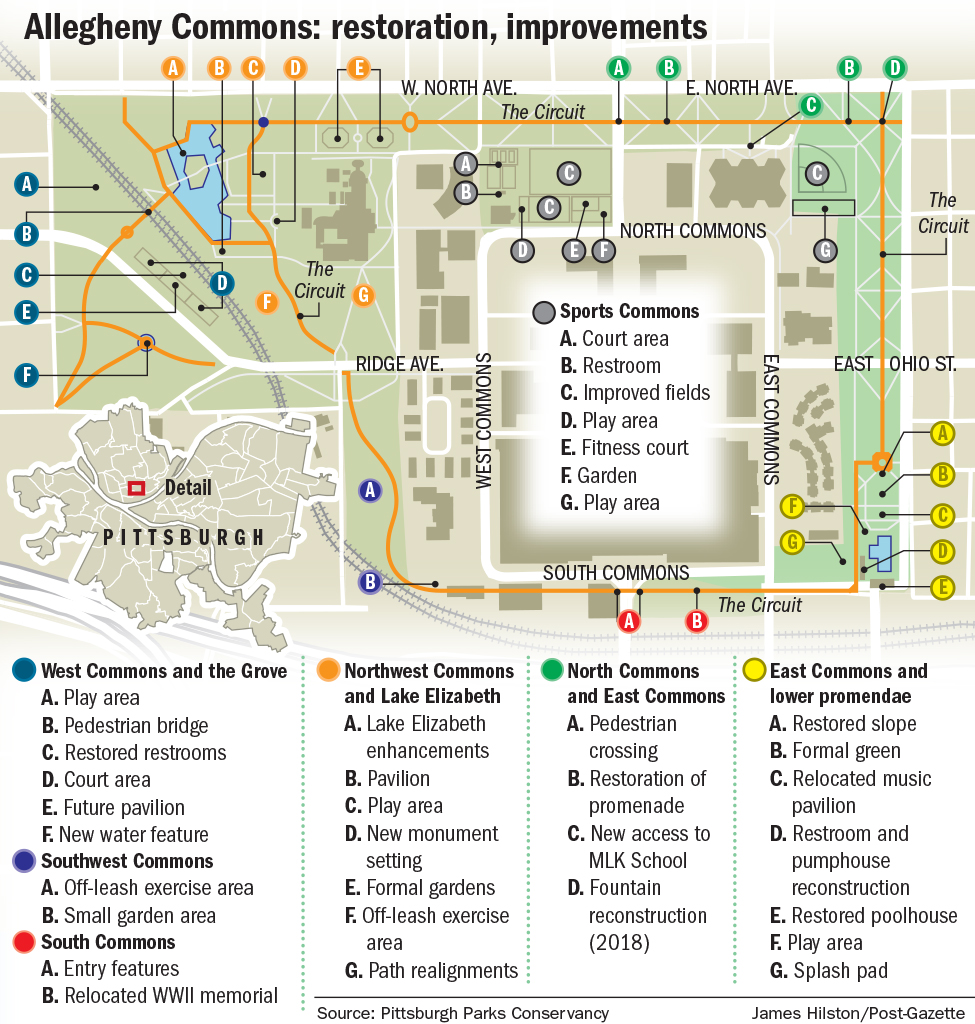 A $1 million Redevelopment Capital Assistance Program grant from the state Department of Community and Economic Development helped pay for the northeast fountain, he said, crediting state Sen. Wayne Fontana and state Rep. Jake Wheatley for their support. Duquesne Light contributed $500,000 to the cost of lighting the promenade.

A $50,000 grant the conservancy received last fall from the Pennsylvania Historical and Museum Commission will be put toward rebuilding the 15-foot-wide path, planting 100 trees and installing 30 new benches and 29 lights that are period-appropriate and energy-efficient. That grant also will pay for restoring another park fountain called “Man, Beast and Bird.” The historic fountain will be moved back to its original site in the park near Federal Street and West North Avenue.

The park has four sections — North, East, West and South Commons. The next phase of work, Mr. Snow said, will stretch from Federal Street to the George Washington statue. Old shrubs around the Washington monument will be removed and replaced. Another pedestrian crossing will be installed at Arch Street. 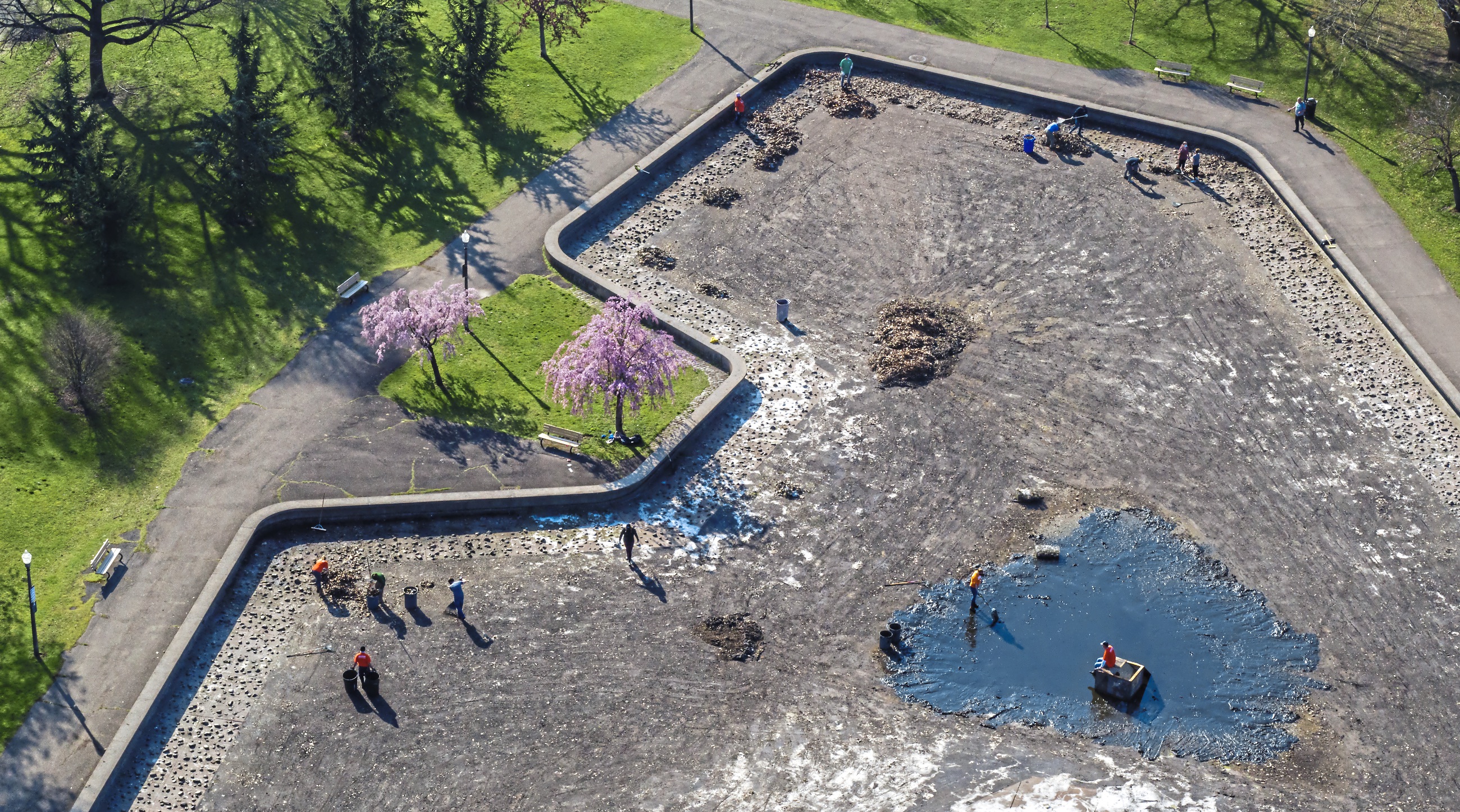 Volunteers clean the bottom of Lake Elizabeth during "What the Muck," the annual Lake cleanup in Allegheny Commons Park on Tuesday, April 6, 2021, on the North Shore.(Andrew Rush/Post-Gazette)

And Lake Elizabeth? This past week, employees of city public works, Pittsburgh Parks Conservancy, Allegheny CleanWays and neighborhood volunteers arrived for the annual filthy-stinky rite called “What the Muck.” The two-day effort removes a slick blend of algae, geese guano, sticks and trash from the shallow lake. Erin Tobin, community engagement manager for the parks conservancy, coordinates the cleanup.

Brandon Riley, the conservancy’s manager of capital projects, said plans call for a full restoration of Lake Elizabeth, a modernist gem designed in 1967 by John Ormsbee Simonds. But before it can be restored, electricity must be brought into the West Commons. One option being considered, Mr. Riley said, is to use Lake Elizabeth to hold storm water runoff, then gradually release the water back into the ground around the lake. 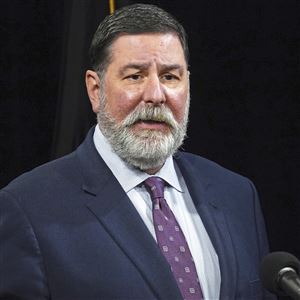 Mariana Whitmer, who chairs the Allegheny Commons Initiative, said options for reducing the geese population around Lake Elizabeth include planting tall grasses around the water, using dogs to chase the geese and oiling eggs in geese nests to prevent new birds from hatching.

Near the lake, in the Northwest Commons, is an off-leash dog area. Another is being considered for the Southwest Commons.

Ms. Whitmer would like the people who use the venerable park to do so with sensitivity and abide by its rules. One day she reminded a woman with a dog in another part of the park that her pet needed to be on a leash.

“So do you,” the woman replied.

Correction, April 10, 2021: A previous version of this story misspelled the first name of Mariana Whitmer.